3 Disruptions to Manufacturing in China

Eliminating disruptions to manufacturing in China is not always entirely possible, but armed with this information they are at least less severe. 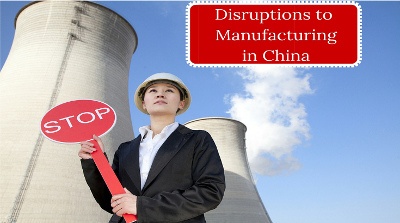 If you import products from China, have you ever had production come to an abrupt halt around Chinese New Year (CNY)?

The holiday comes every year, and with it, a mass exodus of workers heads home to celebrate. Like Christmas elves, workers buzz along hurriedly to fulfill orders as the holiday approaches. Then suddenly, the garment workers stop sewing, the furniture makers stop cutting and factories across China close their doors for weeks at a time.

Chinese New Year is just one of several possible disruptions to manufacturing in China that you might encounter. Some factors are controllable, such as which supplier to work with and what raw materials to use for production. On the other hand, some disruptions are bound to happen whether you’d like them to or not.

But there are measures you can take to minimize their impact. Let’s look at three of the most common disruptions you might encounter and how to keep them from hurting your business.

Typhoons in southern and coastal China

In July 2015, a factory in Taizhou, Zhejiang Province had to close for two days after being hit by typhoon Canhong. Obviously, the factory you work with cannot produce your

goods if it’s inundated with water or is severely damaged. Provinces in southeast China that are adjacent to the coast are frequently hit with typhoons in September and October each year. When a natural disaster strikes there, the global supply chain can feel its effects for days or weeks afterward.

Your supplier might be closed for an even longer period of time if they are affected by a greater calamity. And as we saw with super typhoon Haiyan, which severely damaged southern China in November of 2013, typhoons can cause damage and flooding on an epic scale. The storm resulted in over 11,000 deaths and $686 million in damage. Understandably, manufacturing stalled in the affected areas as people worked to recover from the disaster.

Aside from the factory itself, other elements of the supply chain are affected by bad weather—chiefly infrastructure. Roads, railways and airports can all be devastated by a storm. It’s important to consider factory proximity to major roads and ports when choosing a supplier.

Not only is factory location relevant for transporting your goods, but also in terms of the potential risk of being struck by a natural disaster (related: 5 Ways Factory Location Affects Your Order). Could aid reasonably and quickly reach that location? A factory that is far from a major city, for example, might struggle to restore lost electricity and water after a major catastrophe. This will directly impact how soon your product is manufactured and when it leaves the factory.

Major shipping lanes are affected when a storm approaches. Typhoon Utor shut down the Qiongzhou Strait in 2013. The storm was so severe, it even forced rail lines to close. When you import goods from farther away, there’s a greater threat of bad weather disrupting shipping. If you’re working on a tight deadline, you might need to quickly reroute your goods to another airport or seaport in order to limit delays.

The government affects business in every country. And when it comes to disruptions to manufacturing in China, the government can be a major one.

China’s central government recently enacted new environmental protection reforms in response to mounting concerns about pollution caused by manufacturing. Now local and provincial governments have the power to fine polluting factories for every day their pollution exceeds emissions limits. Governments can even mothball production or order that factories be shutdown altogether or relocated.

Pollution is sometimes so extreme that the government shuts down factories in an entire city and the surrounding areas without notice. This was the case in December of 2015 when Beijing’s air pollution was so horrendous that cars were ordered off the road and construction sites, factories and coal plants were temporarily closed.

What happened in Beijing is an example of how the country is still trying to balance its rapid growth with sustainability and protecting the environment. In such a balancing act, order fulfillment can take a backseat to controlling pollution and you should definitely consider this among the potential disruptions to manufacturing in China that you may encounter.

"#Pollution #control can stall your #factory orders at a moment's notice"

Another way China’s government can interrupt production is when it has to cut a factory’s utilities. Demand for electricity is highest during the summer, typically to deal with high temperatures. During this time, cities in China will occasionally face power shortages. And in response, local governments will often cut or limit electricity usage to ensure residential areas have adequate power.

Zhengzhuo in Henan Province had to ration electricity to industrial areas in 2014, which temporarily left some factories without power. Industrial areas are the main targets of power cuts during peak usage hours. However, because cities plan the power cuts in advance, factories typically receive a notice from the local government two or three days before a cut. This allows factory managers to shuffle their production schedule as needed, which can help you avoid delays to your own orders.

One of the most significant disruptions to manufacturing in China is also one that tends to impact the global economy every year. Chinese New Year, also called the Spring Festival, is the most important holiday in Chinese culture. CNY is observed at the end of January or early February, following the lunar calendar. 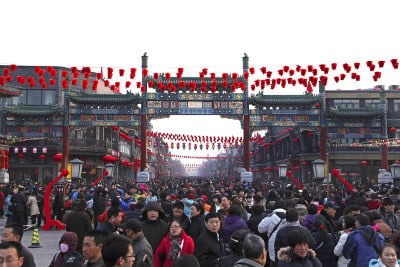 If you’ve ever imported goods from China during this time, you know that the most immediate effect of Chinese New Year on manufacturing is factory closures. The vast majority of factories in China will suspend work during the national holiday, some closing 1-2 weeks before and after the holiday as well. Most Chinese workers, regardless of industry, will return to their hometown during CNY. Expect to see a major slump in production during this time.

Disruptions to manufacturing in China caused by CNY are not limited to factory closures. High worker turnover is very characteristic of Chinese factories during this period. Many of the factory workers that head home in droves do not return to the factories after the holiday is over. In fact, an estimated 15-30 percent of China’s migrant labor force does not continue work in the same factory following CNY—as many as 78 million workers annually.

If you’re manufacturing in China during this period, you should be especially careful of product quality for two reasons:

You can protect yourself by carrying out third-party inspection of an order before it ships. Independent product inspection offers you an unbiased, transparent look at your goods, rather than having to take the supplier’s word for it.

Many factors can potentially hamper your efforts at importing or manufacturing products overseas. This list is by no means exhaustive. But if you source goods in the area, these three disruptions to manufacturing in China are likely to be the most common you come across.

You might not be able to control exactly how severe and common these disruptions are. But preparing your customers and your suppliers for these issues will allow you to minimize their impact on your business.

And if you'd prefer to listen to this topic instead, check out this manufacturing podcast!