3 Telltale Signs of a Bankrupt Factory 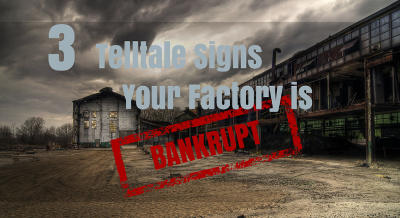 If you've yet to be involved with a factory in China that has abruptly shut its doors for good, then consider yourself lucky. More and more factories in China are shutting their doors. Your factory could close at any time without refunding your order deposit or shipping your goods.

Various factors in China are contributing to an increasing number of factory closures. For example, more and more Chinese cities fail to meet air quality standards. This has led to factory closures as the government in Beijing works to strike a balance between productivity and cleaner environment initiatives. Other factories, such as those that produce steel in northern Hebei Province, are closing in large numbers as the government consolidates production in certain industries. The focus of this article will be on factories that close due to bankruptcy. But whatever the reason, when a factory shuts down it usually happens without much prior notice to you, the buyer. 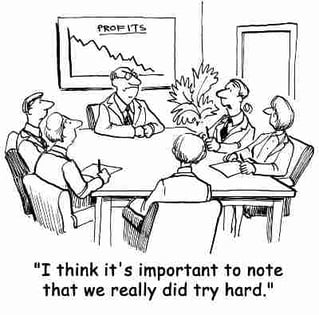 factory generally owes its workforce. In brief, a factory that shuts its doors permanently must pay every worker the equivalent of 1 month’s salary for each year that worker has been working for the factory. The average worker's salary is currently around $400 USD per month. That means the owner of a factory that has 2,000 workers, with the average time worked from each worker around 5 years, should expect to pay somewhere around $4 million in severance if the factory closes.

It should come as no surprise that factories that close sometimes seem to "disappear" overnight with management skipping town. The owners hope to avoid this massive payout to workers. This practice is, of course, illegal. But it's precisely those factories that are in financial trouble that are least able to afford this kind of severance payout. At the moment, China is considering legislation to address this issue, which has led to many laid off workers up in arms.

And although the lack of payment to workers is a serious concern, consider the risk posed by a sudden factory closure to your business, especially if that factory is one of your key suppliers. You likely would not have access to any of your molds. And any processes or procedures developed at the factory for which you do not have documentation would be lost. This could make it difficult for you to work well with a subsequent supplier.

For this reason, we thought we would bring your attention to some red flags with which you should be familiar. So keep watch for these three telltale signs of a bankrupt factory…

Excess manufacturing capacity is often one of the first signs that there is something wrong, or something about to be wrong, with a supplier. And over capacity can often precede financial issues for the factory by 3-5 years. What’s often happening here is that the factory is expanding way beyond their existing client-base. The possible reasons for this are various, but include: 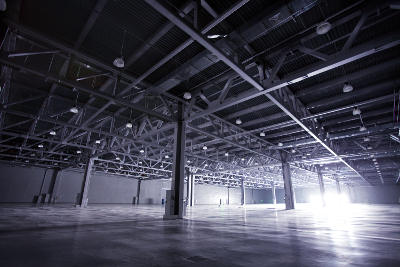 Bankrupt factories are often preceded by over capacity, a sign that can manifest itself from any combination of the above symptoms.

Increasingly poor lead-times are a more serious indication that a supplier could become a bankrupt factory. Are lead-times at your supplier slipping more and more each day? This is a telltale sign that your supplier is having cash issues. The main issue is often that they cannot afford to pay their suppliers that provide them with materials and components needed to manufacture your products. This leads to increasingly less-frequent material deliveries. You may see this in lead-times that seem to continue to stretch longer from one production run to the next.

It should be noted that an easy way to verify a factory's status with regard to materials is to perform a pre-production inspection, where it is stipulated that the auditor should verify that the raw materials have been received. Depending on the product being manufactured, materials should generally arrive at the factory several weeks before the order is meant to ship. Any unreasonable delay or resistance on the part of the factory for this kind of on-site verification is a bad sign. And if the auditor finds there is no material, indicating the supplier is deeply behind schedule, you may soon be dealing with a bankrupt factory.

We’ve saved the most obvious sign of a bankrupt factory for last. Have you heard rumors of staff leaving? It's not uncommon for entire departments to start walking out as the Chinese are often more loyal to their department managers than factory ownership.This is especially true of Taiwanese or Hong Kong-owned factories. 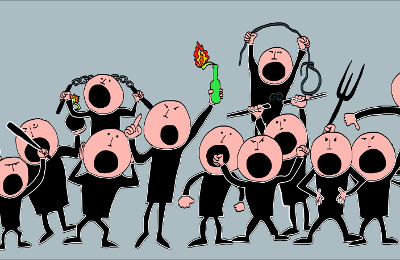 Worker layoffs represent another issue that can present itself in a number of ways. Layoffs are often preceded by strikes. In the case of Wintek Corp, a Taiwanese manufacturer of touch-screens, 16,000 workers at two subsidiary factories in China went on strike over holiday benefits last September. Shortly after in December, Wintek laid off 7,000 employees at its factories in Dongguan, due to allegedly owing 230 million yuan to its suppliers.

When you aren’t seeing major layoffs, what you might inevitably see from your end is factory staff, in various functions, starting to go missing. The occasional departure of one staff member is normal and expected of most healthy businesses. But the issue of employees suddenly leaving in droves should be treated as a major cause for concern.

So keep an eye out for what seems to be a steady, albeit sometimes slow, departure of staff from the organization. This is often a sign of a bankrupt factory.

A factory can close for any number of different reasons – from tightening environmental regulations to financial troubles. A bankrupt factory can have a major impact on your business. Your orders could be canceled altogether without prior notice. You may even have to forfeit your deposit. But here are some clues to look out for to determine if your factory might be on the verge of becoming bankrupt:

To avoid the potential dire straits of dealing with a bankrupt factory, stay on top of what’s going on at yours by looking out for these three telltale signs!