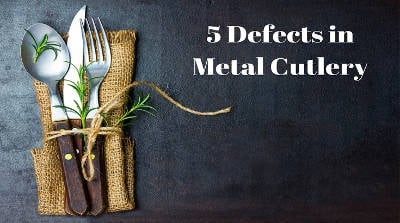 Cutlery—sometimes called silverware—rarely receives much attention these days. What was once considered a luxury item, cutlery is often overlooked because of how common it is today in everyday life. Indeed, the use of cutlery dates back to ancient times. As an example, forks for dining first appeared in noble courts of the Middle East and Byzantine Empire in the 7th century.

While earlier cutlery was made with materials such as bone, wood and precious metals, today’s cutlery is typically made of stainless steel. And just because these age-old utensils are nearly everywhere today doesn’t mean they’re always perfectly made. It’s important to recognize certain defects in metal cutlery.

Defects in metal cutlery most often take the form of appearance issues related to the surfacing of the product. These could be classified as “minor” defects or “major” defects during product inspection, depending on severity (for more information on how to classify defects, see 3 Types of Quality Defects in Different Products).

Some problems are less obvious than others. And you can save yourself from headaches associated with poor product quality, like dissatisfied customers, by knowing what issues to look out for during inspection. So consider these five common defects for metal cutlery the next time you pick up a spoon, knife or fork:

Poor polishing is probably the most common quality defect in metal cutlery. Poor polishing on a metal spoon, fork or knife can be seen as excess polish or inadequate polish on the item’s surface. Some 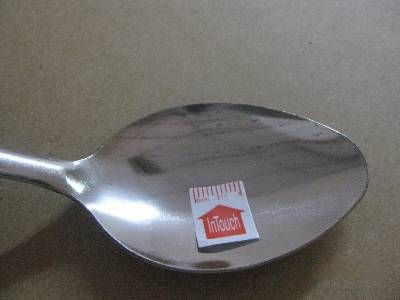 areas may appear duller, while others have more of a sheen. The polishing process for metal cutlery is occasionally conducted manually by workers and often by automated machines at factories as well. You’re more likely to see an inconsistent polish when applied by hand.

Often all it takes to fix this problem is buffing out excess polish or applying more where the surface is inconsistent. Metal polishing equipment may be needed to more effectively polish an item. And it’s often better for any polishing issues to be resolved at the factory, rather than later when goods have already shipped.

Scratches are a surface defect that can lead to both dissatisfied customers and product returns if severe enough or if found in high quantities of an order of cutlery. Although scratches are often hidden by effective polishing, t

hey’re often caused by rough handling during the production process. Scratches can also appear due to inadequate packaging.

Scratches can usually be prevented by careful handling of the finished product. But scratches can also occur in transit if there are issues with the product’s packaging. One way to assess packaging is through pre-shipment product inspection. Various on-site checks and tests, such as the standard carton drop test, can show how well packaging will resist damage caused by normal conditions and handling during shipping.

Normally, scratches found in the finished product are dealt with by polishing. Polish can remove the appearance of most minor scratches in the surface of the cutlery. But if scratches continue to be a persistent issue in finished cutlery, management at the factory may need to look closely at how the product is handled to determine and address the exact cause.

Dents are typically caused by poor molding or annealing techniques at the very beginning of production or by being forcefully impacted later. During annealing, the early rectangular “blanks” of metal are subjected to high heat, which 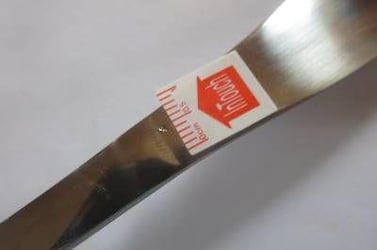 toughens the metal and helps prevent bending and dents in the finished product. If the temperature is not accurately controlled during annealing, the cutlery can be vulnerable to surface defects like dents during the molding process.

Another possible cause for dents and similar defects in metal cutlery is the use of substandard materials for production. It’s sometimes recommended to conduct composition or other lab testing to verify materials, particularly if the finished cutlery is coated in a precious metal, such as gold or silver.

Remedies for dents in cutlery

Dents in cutlery can be difficult to remedy. There’s typically no way to actually remove a dent from a fork, knife or spoon. And dents are usually too large to be concealed by buffing and polishing. If dents are a common issue with cutlery produced at a particular factory, production processes should be checked closely to verify they’re not faulty. Materials may also be tested to be sure they’re appropriate for that product.

Small holes can sometimes appear in the surface of finished metal cutlery that was manufactured using sand casting. Sometimes called sand holes, due to their sandlike appearance, these are often caused by g 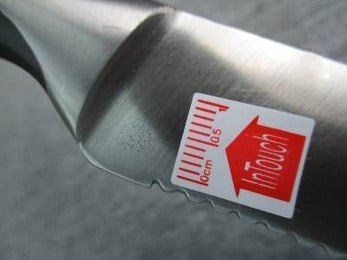 as porosity. Gas dissolves in the liquid metal and then rises to the surface and forms tiny bubbles in the casting as the metal cools. The porosity tends to weaken the affected the area.

If the holes in the metal caused by gas porosity are small enough, it’s often possible to hide their appearance by polishing. But gas porosity on a larger scale that affects many units in an order of cutlery is a more serious problem that can often be prevented. The most effective way to prevent gas porosity is by limiting the molten metal’s exposure to the atmosphere, typically by:

It’s also possible for air to be introduced by turbulence caused by pouring the material into the mold, in which case the mold itself may need to be streamlined or otherwise altered. If gas porosity is a repeated issue with the cutlery that you import, talk to representatives at the factory to see what measures they take to prevent it. 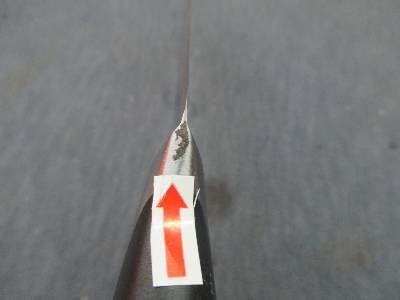 Unless it can’t be easily removed, dirt is typically classified as a minor defect, regardless of the type of product inspected. But frequently finding dirt on finished cutlery may be an indication that a supplier is careless when it comes to handling the product. Dirt found on a product may also be introduced at some point later in the supply chain, such as shipping. It helps in such cases to make sure important packaging QC checkpoints are followed to ensure quality packaging prevents dirt contamination.

Aside from keeping dirt from a product with adequate packaging, finished cutlery should be checked for dirt before shipping. Any dirt found should be washed or wiped away prior to packaging.

Maybe you import large quantities of metal cutlery from factories throughout Asia. You might be buying smaller quantities for a restaurant. Or you might simply be looking to pick up a set as a gift. In any case, it helps to make sure you’re getting the quality you pay for. Defective cutlery can give customers and guests a negative impression.

So the next time you’re shopping online, in a store or checking product at a factory before it ships, be sure to look out for these common defects in metal cutlery.

What other quality defects have you seen in metal cutlery? Let us know in the comments below!

Crystal Ge comes from Gansu Province in China’s north-west. Having joined InTouch in May 2012, Crystal is the longest standing Client Manager at InTouch and loves traveling the world and eating amazing food.