A Brief History of Quality Control

Quality control has become a key aspect of the manufacturing industry. The QC field has grown significantly over the past couple years. As the history of quality control has progressed savvy manufacturers have worked to stay up-to-date with the ever-changing standards and regulations for product quality and safety. Let’s take a brief look back at the early beginnings of QC and how it has evolved and developed over time.

The Beginnings of Quality Control

It can be argued that quality control, as we know it, began with the emergence of manufacturing during the industrial revolution. In order to yield the most profits, factories needed to produce a product that was superior to the rest in order to attract more consumers. However, in the Middle Ages, well before the industrial revolution began, guilds existed where apprentices were trained in their craft for an extensive period of time. These guilds allowed them to perfect their skills and adhere to the high standards of quality set in place by their employers. In order to become masters of their craft, they needed to prove their abilities and cement their reputations by creating a masterpiece demonstrating their abilities to create a quality product. These processes helped ensure the quality of the products was maintained, consistent and always being improved upon.

Change at the Turn of the Century

Before the early 20th century, the principal focus of mass production had been on quantity, rather than the quality, of goods made. The distribution of equipment, materials and labor were directed towards this end. During these times, quality control was a means of improving upon the machinery and technology to increase productivity whilst using less human energy.

But by the 1920s, the focus had shifted from quantity to quality because of increases in demand. Emphasis was also added to ensuring quality was consistent from shipment to shipment. Manufacturers required cheaper and more efficient work in order to increase output per machine, per person and per hour. Throughout the century, it quickly became clear that working harder and for longer periods of time was not increasing efficiency. The realization demonstrated that working smarter and employing quality control measures was the way to ultimately yield the most profits.

Today, quality control is an integral part of manufacturing. 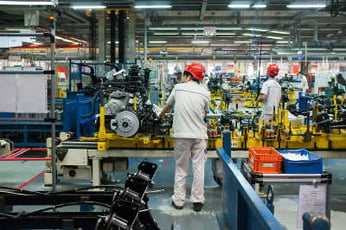 There are several government and professional regulatory bodies in place aimed at ensuring quality product is being sold to consumers, such as Europe’s Directorate-General for Health and Food Safety (DG SANTE) and the US Food and Drug Administration (FDA). With many companies now choosing to produce goods offshore, factory QC inspections have never been more relevant.

As we can see, the history of quality control is long, dating all the way back to medieval times. QC not only helps to improve the quality of goods for consumers, but it can also help to improve production processes and efficiency. By looking at the evolution of QC throughout history, we can see that quality control has played a major role in the advancement of manufacturing, and its existence is still vital to the industry today.