Both of China’s electronics hubs offers something to techies and electronics importers alike. Huaqiangbei is a hot spot for people looking to buy electronic products and parts fresh out of the factory and has similarities to what Zhongguangcun once was. While Zhongguancun still is home to endless aisles of electronics goods to be bought, the legitimacy is amplified by the presence of company headquarters, local university interest, funding and technology incubators. 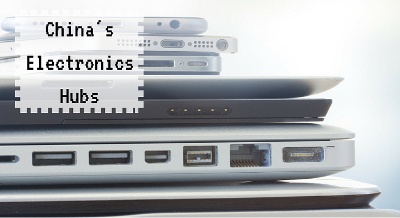 Where can you find electric unicycles, adorable Hello Kitty USB’s, high powered laser pointers and pigs’ feet all under the same roof?

In China, of course!

Several months ago, we told you about five of the largest fake markets in China. This time the focus is on China’s electronics hubs.

"China manufactured over 320 million laptops and 1.1 billion smartphones in 2011."

China is also rapidly cultivating a reputation as an innovative country, issuing several hundred thousand patents per year, many in the technology sector.

Let’s take a closer look at these two electronic tech titans in China. 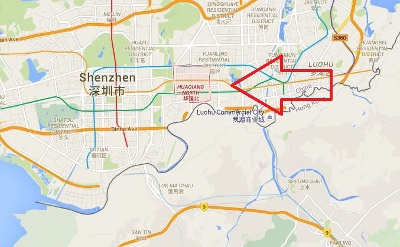 Huaqiangbei (华强北) is a massive electronics parts market in the Futian District of Shenzhen, China. If you aren’t familiar, Shenzhen is all the way South in China's Guangdong Province, bordering Hong Kong to the West (related: The Best Way to Shenzhen from Hong Kong Airport). You can find almost any electronic part you’ve ever dreamed of here, and many you haven’t. Have you ever heard of an iPhone “Nano”? Well that’s because they don’t exist… except for in the magical aisles of Huaqiangbei.

This area in Shenzhen has been associated with cheap, counterfeit brand name products—known as “shanzhai” (山寨) in Chinese—for decades. Smartphones are a hot item here as the latest model of the iPhone can run the average buyer about 1,000 USD brand new. Eighty percent of phone suppliers in China have a booth or store here, and at least 300 million RMB (45.4 million USD) worth of mobile phones were sold at Mingtong Electronics, one of the many malls in this area. Mingtong is both a retailer and a wholesale supplier of consumer electronics.

Almost everyone who comes to Shenzhen for the first time will have a short visit there just to see if they can buy cheap smartphones and other electronics. People who cannot acquire a laptop in a brand name store may come here for the large collection of different brands, styles and models available directly from the factories that produce them. Whatever sort of electronic item you want, chances are Shenzhen has it.

Despite some fake products becoming less popular in recent years, you can still see fake iPhone 6S models in Huaqiangbei that look legitimate and sell for only around one tenth (600 RMB or 92 USD) of the original price. But because the area is known for simply making copies without a high investment in quality, the products are also known for poor longevity—you might spend one tenth of the cost for counterfeit iPhone, but you’ll probably need to buy a new one in a few months.

Unlike many markets of the sort in China, the prices aren’t outrageously high to start with and require little haggling. But as a foreigner, you’re likely to be quoted a price a bit higher than what a local might be asked to pay.

Each booth represents a factory and is there to sell items in high quantities, but don’t worry, you can still buy that single Pikachu USB for a buck. Many of these vendors are well versed in dealing with non-Mandarin speakers. So if you don’t speak Chinese, just point to the calculator the vendor has on-hand, and they will understand you want to know the price.

Huaqiangbei is worth a visit for the experience alone, even if you aren’t looking to buy something. And who knows? When you see the rows upon rows of thousands of electronic products and parts you may just be hit with an impulse to buy!

Zhongguancun (中关村), located in Beijing’s Haidian District, is China’s electronics hub responsible for rapid innovation. Advancement in technology becomes more and more important to the economy of the world’s most populous country. The area spawned almost 50 startups daily in 2014 as tech innovation spread like wildfire.

Zhongguancun used to be like Huaqiangbei in terms of being limited to mostly fake or unofficial name brand products. In the late 1990's, malls 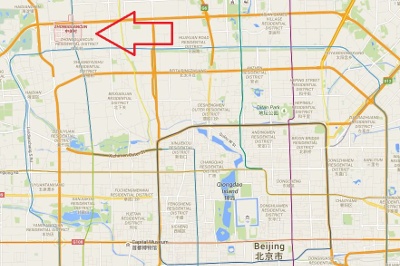 selling computers and other electronics were open at Zhongguancun and attracted buyers from across the globe. But several years later the local government stepped in and successfully cracked down on the sale of counterfeit goods and legitimized the dealings in the market.

The area has transformed into a creative technology hub for investors, entrepreneurs and inventors that some are calling “China’s Silicon Valley”. Zhongguancun boasts research centers, publicly listed tech giants and thousands of startups hidden among the gigantic electronics malls and office buildings. Zhongguancun's revenue as a whole totaled more than 3.5 trillion RMB ($560 billion) in 2014.

Many academic institutions have forged ties with the companies in the area, fueling research and development efforts with fresh minds. Two of the more prestigious universities in the area include Tsinghua and Peking, which actively participate in the area’s projects. The area’s close proximity to local talent has undoubtedly contributed to a jump in China’s effective patents, totaling more than 660,000 in 2014.

Companies that call it home

There are many areas in China with similar technological innovation as startups seek to disrupt the status quo, but Zhongguancun is one area to watch.

Huaqiangbei is a hot spot for people looking to buy electronic products and parts fresh out of the factory and bears some resemblance to what Zhongguangcun once was. While Zhongguancun still is home to endless aisles of electronics for sale, the legitimacy is amplified by the presence of company headquarters, local university interest, funding and technology incubators.

"Huaqiangbei is a hot spot for people looking to buy electronic products and parts fresh out of the factory."

Both of China’s electronics hubs offer something to techies and electronics importers alike. One could argue that Huaqiangbei should strive to evolve and become more like Zhongguancun, since profits in Huaqiangbei seem to have fallen from a peak in 2008.

Ultimately, if you’re visiting Shenzhen, Huaqiangbei is worth the trip. But if you’re interested in more than cheap parts and knockoffs, Zhongguancun may be where you want to go.

Vicky Yu is from Jiangxi Province, China and completed a Masters Degree at Arizona State University. She joined InTouch in July 2014 and is the Quality and Compliance Manager. She loves keeping fit and exploring the outdoors. She is also an excellent cook.