“Making it” in China – The Factory Workers that Make Your Products

Chinese factory workers still face the same issues that have affected many others of nations strengthened by growth in manufacturing. Some continue to live with poor working conditions, safety concerns and a lack of collective bargaining rights. But factories are adapting and improving following increased pressure from brands and retailers to adhere to social compliance standards. Wages are rising. People are leaving a life of poverty and joining the ranks of a growing middle class. And China continues to see consistent economic growth built on manufacturing might.

What image comes to mind when you hear the words “factory worker”? Do you picture an engineer working on an advanced production line? Or do you imagine a team of workers packed in close quarters, working in slave-like conditions for less than a dollar an hour?

Factory conditions can vary largely between countries, factories and the products made. But if you just imagined a factory worker in China, statistically, you’ve made a fair assumption. China is the largest manufacturing country in the world. And China has overtaken the U.S. as the world’s largest manufacturer of consumer goods.

Chinese workers are producing your furniture, semiconductors, mobile phones, promotional goods, kitchen appliances, industrial products, garments, textiles, footwear and many, many other products you might be importing regularly.

But what kind of life are Chinese factory workers living? What opportunities or challenges does factory life present them? And what role do factory workers play in China’s continued growth?

Where do Chinese factory workers come from?

People are attracted from all over the country to work in many different kinds of factories.

The population of factory workers in China has continued to grow with the decline of factory workers in the U.S. According to the U.S. Bureau of Labor Statistics, the number of workers employed in China’s manufacturing sector grew every year between 2002 and 2009, from 85.9 million to 99.0 million, respectively. Meanwhile, just 14.2 million workers were employed in manufacturing in the U.S. in 2009.

Historically, Chinese factory workers have come from the countryside and migrated to cities to find employment. 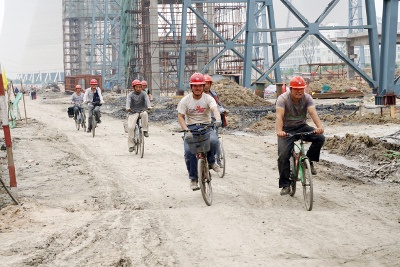 This is an important point for importers to note when choosing factory location. A massive migration during the Chinese New Year holiday contributes to an estimated annual turnover rate of 15-30 percent of the migrant labor force – about 78 million workers this year alone!

Still, the population of rural manufacturing workers increased by 1 million a year from 2002 to 2009, whereas the urban workers saw a smaller increase. This is due to a boom in manufacturing in China’s central and western regions with growth rates reaching upwards of 25 percent annually. Growth in inland manufacturing is largely due to government efforts to curb pollution in major cities along the coast.

The growth of China’s manufacturing sector has been a major contributor to the rise of the country as a leading economic power. According to data from the World Bank, manufacturing contributed to 31 percent of China’s GDP in 2014.

Chinese migrant workers make up a significant portion of China’s new and rising middle class, due to the opportunities that factory work presents. Important to this growth has been China’s consistent increase in hourly manufacturing wages, which have grown by an average of 12 percent a year since 2001. Manufacturing has already moved to neighboring countries such as Vietnam and others in Southeast Asia because China is becoming more expensive.

You’ve likely seen news stories with strong rhetoric about the exploitation of factory workers that live in an endless cycle of poverty. But accounts of Chinese workers have shown that factory work represents a path to a better life and an escape from poverty for many.

"Factory work represents a path to a better life and an escape from poverty for many."

Moving from rural to more urban areas for employment means people have easier access to education and training, greater earning potential and better access to improved healthcare facilities. In this sense, China’s growth has followed a trend similar to that seen in the development of the U.S. and other Western countries in the past.

Chinese factories have come under increased scrutiny in recent years as stories of corruption, unsafe conditions and low wages have emerged. Research has shown that Chinese factory workers are more than three times as likely to be killed at work than American factory workers, despite only earning less than a tenth of their wage.

"Chinese factory workers are more than three times as likely to be killed at work than Americans."

Some factories frequently pay less than the minimum wage or will withhold pay for minor infractions. Factories in China have also been known to extend their standard workday beyond the government-mandated 11 hours.

But more opportunities and greater mobility, due to advances in infrastructure like China’s high-speed rail network, have allowed workers more freedom. Many will frequently move from factory to factory until they find satisfactory conditions and wages.

There are also more processes in place now to control and monitor worker treatment and payment of wages than previously. Poor conditions and factory disasters have given rise to an increased awareness of social compliance auditing as an essential process for supply chain management.

Chinese factory workers still face the same issues that have affected many other nations strengthened by growth in manufacturing. Some continue to live with poor working conditions, safety concerns and a lack of collective bargaining rights.

But factories are adapting and improving following increased pressure from brands and retailers to adhere to social compliance standards. Wages are rising. People are leaving a life of poverty and joining the ranks of a growing middle class. And China continues to see consistent economic growth built on manufacturing might.

What’s the lesson for importers? Do your part to investigate any suppliers you plan to work with by carrying out an audit based on the ISO9001 or SA8000 standard. A factory audit can help you avoid working with a bad supplier and the negative publicity that can come with it.