Sometimes you are lucky and find what seems to be a perfect Chinese factory. Their prices are reasonable and you haven't noticed any defects - at least not yet. While everything might appear fine on the surface, a recurring (and usually hidden) issue that plagues factories in China is social insurance violations. This problem might not seem significant at first, but it could be a red flag to your clients' social compliance programs and signify other problems with the supplier you are trying to work with. 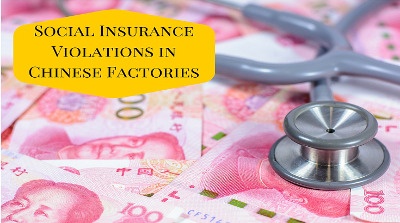 Let’s say you’re an operations manager at a clothing brand that works with suppliers in China. Walmart is one of your largest distributors and customers. And you conduct social compliance audits fairly regularly at the Chinese factories that produce your goods to make sure you’re prepared in the event of a formal audit from Walmart.

But while some violations are being found and addressed by the factory, one issue seems to persist audit after audit: unpaid social insurance.

Chinese law requires factories to provide social insurance benefits to workers. And although social compliance violations related to social insurance are generally considered “minor” and won’t result in failing an audit, they continue to be a widespread problem.

How prevalent is China’s insufficient social insurance coverage? The numbers are staggering. Out of China’s approximately 770 million workers, reportedly only about 242 million workers had any kind of pension in 2013. With such a small portion of China’s workforce being provided insurance, it’s no wonder that social compliance audits discover this problem again and again.

A lot of Chinese factory workers appear to be receiving inadequate social insurance benefits. But does that mean workers are being cheated or receiving unfair treatment?

China’s recent reform to its social insurance law, introduced on July 1, 2011, set up a new framework for employees. The law mandates all employers in China enroll employees in five insurance programs:

Even though it is not officially part of China’s social insurance system, workers must also enroll in a mandatory housing fund. Employees and employers are expected to add to each insurance program up until a certain cap. Different regions have different contribution guidelines, but below you can observe the general range of what companies and individuals are expected to contribute.

Why are social insurance violations so common?

In many cases where you find social insurance violations at your supplier’s factory, an audit might only have revealed a few employees that don’t have all the necessary insurance coverage. You might contact the supplier and ask them to address the violations, and they’ll likely agree to do so. But a subsequent audit report may show there are still workers that lack all the necessary coverage—often these workers differ from those originally found without insurance. Why is that?

China’s high rate of worker turnover is one major reason for the frequency of social insurance violations found in Chinese factories. It’s very possible that employees revealed by an audit to lack adequate social insurance are trainees not yet established as full-time staff. These new staff may not yet be enrolled in the mandatory social insurance program.

A major catalyst to worker turnover is the annual Chinese New Year (CNY) holiday. During CNY, hundreds of millions of workers return to their hometown to celebrate. Many factory workers, particularly migrant workers, do not return to the same factories in which they were previously working. In fact, the turnover rate for the migrant labor force is estimated at 15-30 percent during this time.

Again, social insurance violations found at a Chinese factory typically won’t result in failing an audit. But these issues can lead to other complications—both for suppliers and the importers that work with them.

When workers strike back

One potential complication of social insurance violations is backlash from factory workers. This was the case in April of 2014 when workers at a shoe factory in Dongguan discovered that management had been underpaying social insurance contributions to about 70,000 workers for several years. More than 10,000 workers went on strike at the facility.

While strikes of this scale are not very common, when they do occur, a worker strike can be a public relations nightmare. Not only could you lose customers over the issue as retailers try to distance themselves, but your brand might be perceived as unethical if issues like social insurance violations come to surface.

It’s worth noting that the size of your supplier is a relevant factor to consider. But it’s also important to remember that even though a seemingly insignificant violation may be flagged as a minor issue, it may balloon into something much bigger and potentially damaging if not eventually addressed.

A social compliance audit of your supplier’s factory revealing that most employees are not covered under any insurance programs raises some red flags about your supplier. The factory may be only hiring part-time workers for temporary work in order to avoid contributing to their insurance, presenting two major concerns:

This kind of operation is hard to catch unless an audit is performed. Even then, the factory may deny access to an auditor if they feel they have something to hide. In the end, depending on your supplier standards, this issue may be the breaking point deciding whether or not to work with a particular factory.

Audits for social compliance frequently discover social insurance violations as a recurring issue. While some factories legitimately lose full-time workers, others might intentionally hire part-time workers in a shady way to shirk their insurance responsibility. And if insurance is denied for a high number of employees for an extended period of time, you might find your brand linked to a workers’ strike at the factory.

If you find that social insurance violations are a recurring problem at one of your suppliers that’s not being addressed by the factory, you may want to find a new supplier.

And if you'd prefer to listen to this topic instead, check out this manufacturing podcast!