The U.S. Ban on Imports Made with Forced Labor

Your imports made with forced labor cover a multitude of products, ranging from cotton and carpets to seafood and rice. Read on to find out what the ban on forced labor in the U.S. means for your business! 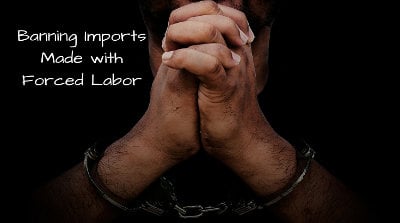 “I think most Americans were horrified to learn that the fish in the pet food they give to their cats and dogs was being caught by children forced to work on ships against their will,” said Senator Sherrod Brown. Brown co-sponsored the amendment to a bill that officially outlaws importing products made with slave labor to the U.S. The bill was signed into law by President Barack Obama on February 17th.

What does the new law mean for importers?

For starters, about 90 percent of seafood sold in the U.S. for human and pet consumption is imported from countries like Bangladesh, Burma, Cambodia, and Thailand. But that’s just scratching the surface of importers potentially affected by the new ban.

Companies like Nestlé recently discovered that forced labor was employed not only in the catching of seafood in Thailand, but also in the harvesting of cocoa in Ivory Coast.

Illegal imports made with forced labor generate an estimated $150 billion in profits every year. In human terms, the International Labor Organization (ILO) estimates there are 20.9 million victims of forced labor around the world.

How might the new law affect your supply chain? How will the ban on forced labor be enforced? And what can you do to investigate your suppliers?

The new law banning imports made with forced labor

The new ban is actually an amendment to the U.S. Tariff Act of 1930, and grants Customs and Border Protection the authority to seize shipments where forced labor is suspected. The earlier law contains a provision allowing for the importation of goods made with slave, child or prison labor if domestic production could not meet demand.

"The new law adjusts one that grants Customs the authority to seize shipments where forced labor is suspected."

Legal historians suggest that lawmakers, who drafted the original law during the Great Depression, allowed the exception in an effort to better support America’s struggling economy at the expense of foreign labor rights.

Origins of the amendment

Labor rights activists have long advocated addressing imports made with forced labor, including seafood. But reports of the global problem of forced labor only recently reached mainstream news outlets, such as The Associated Press' coverage on the presence of slavery in Thai companies that export seafood to the U.S. The reports led to the rescue of at least 2,000 captive fishermen and the arrest of more than a dozen alleged traffickers.

When the bill to amend the Tariff Act was introduced to Congress by Senators Brown and Wyden, it received bipartisan support, passing with a 75-20 vote in the Senate on February 11th before being signed into law the following week.

Which industries will be affected by the ban?

According to the U.S. Department of Homeland Security, only a few countries have laws addressing forced labor goods. Prison-labor imports are illegal in Canada, for example, and Australia has outlawed financial benefits from forced labor.

Still, some believe that if the U.S. is successful in preventing illegal imports, the law will have a ripple effect on supply chains around the world. And if you, knowingly or not, import goods from foreign suppliers that use involuntary or child labor, you run the risk of:

The U.S. Department of Labor maintains a list of more than 350 goods and their source countries believed to have been produced by child labor or forced labor. You may be affected by the new law if you import products containing materials or goods on this list. Some such goods originating from countries in southeast Asia are shown in the table on the right.

Enforcing the ban on imports made with forced labor

The new law banning imports made with forced labor mandates that Customs and Border Protection file an annual report to Congress covering actions taken to seize shipments or otherwise stop forced labor imports at their port of entry. Meanwhile, Homeland Security agents in 46 countries will be responsible for investigating firms linked to illicit trade.

The ban, though well-intentioned, leaves some questions about how the law will be carried out in practice. Secretary of State John Kerry believes 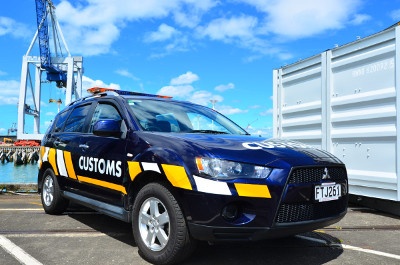 enforcement will be a challenge. Others are concerned that Customs and Border Protection investigators might be overreaching in their seizures and will have difficulty proving forced or child labor was used in the manufacture of goods.

Before an investigation can begin, U.S. Customs officials must receive a petition showing “reasonably but not conclusively” that forced labor was involved in the production of goods.

But as uncertainty looms about enforcement, Thailand’s government has actually started taking action to address forced labor at the source. The Thai Ambassador to the U.S. Pisan Manawapat says tracking devices have been installed on at least 5,300 fishing ships in the past two months to help monitor workers.

Investigating your own suppliers for forced labor

The implications of the law are far-reaching and, like most importers, you probably don’t want to be associated with a supplier violating it.

The trouble is you may have forced or child labor in your supply chain already and just don’t know it yet. That’s why it’s crucial that you be proactive in investigating your suppliers to identify this and any other compliance issues as early in your relationship as possible.

"You may have forced or child labor in your supply chain already and just not know it yet."

Auditing a supplier for social compliance

The question of how effective audits are for social compliance is somewhat controversial. The findings of such an audit typically rely heavily on documentation, such as payroll records, which can be forged, and worker interviews, which can be staged and rehearsed (related: How Effective are Worker Interviews During a Social Compliance Audit?).

Nevertheless, audits for social compliance based on SA8000 or retailer standards remain one of the few ways you can investigate instances of forced labor and other ethics violations in your supply chain. In fact, many importers conduct a third-party audit for social compliance to prepare their supplier for a formal audit from retailers like Walmart. The stakes are high since compliance violations can lead to the retailer refusing to accept & distribute your products.

By sending an independent auditor to a supplier to investigate, importers can identify and remediate labor violations found at the facility. Specific areas covered under a typical social compliance audit include workers’ age, wages & social benefits, hiring practices, and occupational safety hazards, to name a few.

If labor violations are discovered during an audit, a Corrective Action Plan (CAP) can be developed for improvement, the progress of which can be monitored with follow-up audits. If forced labor or any other relatively serious violation is found, it may be time to find a new supplier altogether.

It’s often easier to carry out such an audit while considering a new relationship with a prospective supplier than it is to look for alternatives after uncovering serious violations within an existing part of your supply chain.

The new law banning imports produced with forced labor could be a milestone in improving working conditions around the world. And while the details of its enforcement are still uncertain, the ban is likely to affect importers not only in the U.S. but in other nations as well.

Foreign governments may finally be stepping in to enforce local and international labor laws on their home turf. Suppliers may be monitored more closely to ensure workers are being paid livable wages. And importers may face higher costs for products ranging from cocoa, sugar, and coffee to garments, textiles, and electronics.

As an importer, you can adapt to these changes by investigating your suppliers now. A simple audit conducted for social compliance can save more than the reputation of your business—it can help put an end to slavery and child labor.

And if you’d rather listen to this post instead, you can check out this manufacturing podcast!