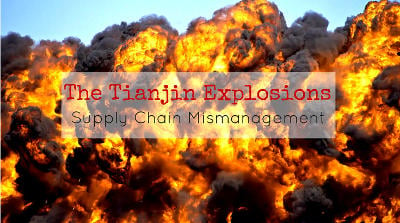 How could the Tianjin warehouse explosions on August 12th have been prevented? And what can this tragedy teach us about managing supply chains?

On the morning of August 13th, I woke to find dozens of posts on social media clamoring about the events that occurred late the night before. There had been reports of two massive explosions in a warehouse in Tianjin, a prominent port city in Northern China. Shock waves had been felt several kilometers away from the blast site. Soon videos of the explosions emerged from people in Tianjin, who were able to capture the disaster on their mobile phones. Eye-witness accounts started to clash with state media reports. And despite the best efforts of the Chinese government to downplay the incident and censor those who were sharing what they had seen, both videos and speculation proliferated.

And while the true number of casualties and some other facets of the disaster are still uncertain, this article intends to illuminate, based on what is known, how the Tianjin warehouse explosions could have been prevented – namely through the use of an ISO 9001-type audit.

Background – What We Know About the Tianjin Explosions

Near midnight on the night of August 12th, firefighters were working to put out a blaze that had started in a warehouse owned by Ruihai Logistics, a company which handles hazardous materials 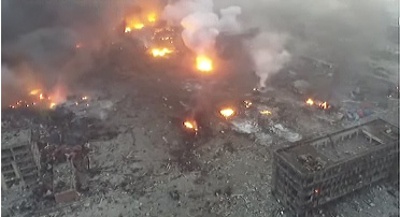 near Tianjin’s Bohai Bay. The warehouse was a storage area for containers of hazardous materials. Within about an hour, there were two explosions large enough to be seen from space. The chemicals stored in the warehouse are still not completely reported, but 700 tons of sodium cyanide, 800 tons of ammonium nitrate, and 500 tons of potassium nitrate are confirmed to have exploded. Chemical experts have said that water used in fighting the fire could have mixed with calcium carbonite to create acetylene, a highly volatile gas, which could have triggered the explosions.

As of mid-October, the number reportedly killed from the explosions has reached 173 people, with nearly 800 additional people reportedly injured. The death toll includes 95 firefighters, making the Tianjin warehouse explosions the deadliest incident for Chinese firefighters dating at least since Communist China’s founding in 1949. Many have speculated, including Reporters Without Borders, that the number of casualties has been significantly under-reported by state media. Evidence, such as the location of a major residential area less than 1 km from the blast site, suggests that casualties may be much more numerous.

A massive crater formed where the exploded warehouse had been situated. Physical damage was extensive – for example, more than 8,000 new cars were burned from the explosions, and buildings as far as 4 km away from the blast site incurred damage to walls and ceilings.

Potential Chemical Fallout from the Blasts

One factor that continues to pose a threat is the potential for toxic chemicals to pollute the area surrounding the blast site. Within a week of the explosions, thousands of dead fish washed ashore from the River Hai near the blast site. 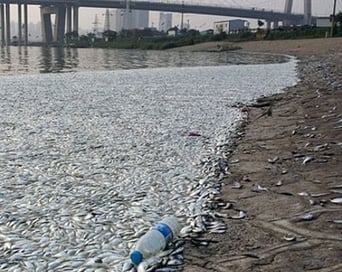 Residents of Tianjin reported seeing an unusual foam substance on local streets after the first rainfall following the explosions. Others reported skin irritation after coming in contact with the rain. Officials have claimed these issues are not due to pollution.

Although the precise cause of the fire and the explosions that resulted is unknown publicly, there are several areas where negligence was likely a major contributing factor. Questions were raised soon after the disaster regarding the legitimacy of the warehouse, and the method for handling and storage of the hazardous materials involved. An investigation into the warehouse by means of an audit might very well have mitigated the effects of, or even prevented, the explosions.

"An audit of the warehouse involved might very well have prevented the Tianjin explosions."

A few points regarding the legality of the storage area that exploded are especially concerning. First is that the warehouse involved was located well within one kilometer of a nursery, an elementary school, a motorway, and a large residential area, despite government regulations prohibiting this proximity to such areas. Given the radius of the blasts, there very likely would have been fewer casualties if Ruihai Logistics had abided by these regulations.

Another concerning factor lies in reports of the quantity of hazardous chemicals stored at another warehouse near the blast site - an estimated 70 times the legal quantity of toxic sodium cyanide. This lack of compliance with local law has real implications regarding the continued threat of contamination to local water supplies.

Finally, reports found that Ruihai’s license to handle hazardous chemicals expired in October 2014 and was only reinstated in June 2015, meaning the company had been operating illegally during this lapsed period.

How an ISO 9001 Audit Might Have Prevented the Disaster

Properly conducted, an audit of the warehouse would have been able to identify issues related to compliance with local law. Additionally, issues with Ruihai’s handling and storage of the hazardous materials might have been identified during a specific audit based on ISO 9001 standards. If such issues contributed to the disaster, it’s likely the warehouse could have taken corrective action in advance to limit the risks of contamination or explosion, based on the findings of an audit.

ISO 9001 standards come from a family of standards related to quality management systems,  designed and maintained by the International Organization for Standardization (ISO). Manufacturers and distributors can acquire ISO 9001 certification provided they meet certain criteria. Similarly, qualified third-party inspection and auditing companies can audit manufacturers’ and distributors’ facilities for adherence to ISO 9001 guidelines. Five main areas from the current ISO 9001 guidelines with which this kind of audit is concerned are:

The two main areas of such an audit concerning the handling of materials are quality management and product realization.

Both quality management and product realization deal with the traceability of materials. The excerpt below is from an actual ISO 9001 audit report template, and shows that the traceability of materials is verified by matching documentation to finished products. In the case of the materials stored in the Tianjin warehouse, documents should have been available tracing chemicals and their quantities back to their origin.

Section 7.5.3 of ISO 9001:2008 specifies that product realization includes measures taken by the facility to control the unique identification of the product and maintain records on-site. If those responsible were unaware of the presence of 70 times the legal quantity of toxic sodium cyanide, an audit for ISO 9001 would have potentially revealed this.

Part of product realization relates to the proper storage and labeling of materials, a lack of which likely played a role in the Tianjin explosions. As shown in the audit template excerpt below, ISO 9001 is relevant not only as it applies to labelling, but also with regard to proper storage of chemicals and materials so as to avoid contamination.

Proper separation of materials and chemicals is also a key facet of an audit using the current ISO 9001 framework to prevent contamination and other hazards, including fire.

The ISO 9001 standards are currently going through a revision, and an updated version, ISO 9001:2015, is expected to be finalized and released later this year. Although the full revision has not yet been made public, new guidelines concerning materials handling will be contained in section 8.5. Specifically, section 8.5.2 covering identification and traceability addresses:

The updated version of ISO 9001, with greater emphasis placed on “risk-based” thinking, will aim to avoid unsafe conditions related to the handling of materials, such as those which occurred in the Tianjin disaster.

The tragic Tianjin explosions have, so far, left many questions unanswered. Censorship of the media by China’s central government has made it difficult for the public to be sure about the exact cause, number of casualties, and extent of damage from the disaster.

But one point is apparent -  negligence on the part of the company responsible, whether deliberately or unknowingly, led to the illegal storage and handling of dangerous chemicals that ignited the blasts. The disaster has led to almost 200 deaths and another 800 casualties, while threatening the safety of the local water supply. An audit of the facility involved would have potentially revealed the risks and, quite possibly, prevented the fire and resulting blasts. The Tianjin explosions will likely be remembered for decades to come as a textbook case of supply chain mismanagement.

In this post we covered the causes and effects of the Tianjin explosions and the possible ways the disaster could have been prevented. Be sure to check out the manufacturing podcast episode covering this issue.