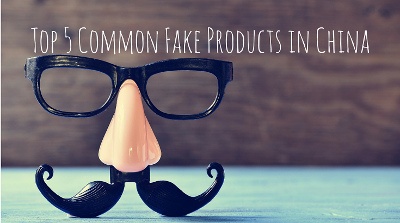 Have you ever had a friend come back from a trip to China and hold up 5 new name brand Prada bags? “Look what I got in Shanghai!”

Chances are good that those bags came from one of China’s many wholesale markets that sells fake goods.

Here are 5 of the most commonly found fake products in China:

Consumer electronics are one of the most popular fake products you’ll find in China. One example of a counterfeit name brand product here is the iPhone. New iPhones often cost double what you might pay in the United States, due to import tariffs.

It should come as no surprise, given the high margins on fake iPhones, why counterfeiting is so rampant. This past summer, police in Beijing shut down a counterfeit manufacturing operation and seized more than 40,000 fake iPhones valued at more than $19 million.

Most of the fake electronic products are counted as copycat products. The copycat company either based the brand or design of the logo on a branded product. For example, you may find a phone with spelling of “Nokai” instead of the brand “Nokia”. The design may be totally different from a real Nokia phone, but the name of the brand is clearly a copy.

Luxury brand bags are every girl’s dream. But not every girl can afford to buy the real thing. This demand led to the birth of a massive fake luxury bag and purse market.

The fake bags can be be divided into different levels:

It’s not hard to find a low quality fake in just about any wholesale market in China’s major cities. But some wholesale markets that sell high-end copy bags will go to great lengths to make their bags indistinguishable from their genuine counterparts.

One investigation found that wholesale markets in Wuhan city were providing fake invoices and receipts with the bags. Some receipts had barcodes showing the names and addresses of genuine stores in Hong Kong. The same investigation found fake merchandise branded as Prada, Chanel, Burberry and Louis Vuitton selling for as little as 200 RMB – about $35 USD.

Brand name shoes are either directly and indirectly counterfeited. The most commonly found fake shoes are sports brands like Nike, Adidas, New Balance and Converse.

Mass production of counterfeit shoes is thought to have begun when multinational footwear brands began outsourcing manufacturing to China’s eastern provinces. Fujian, Zhejiang and Guangdong Province all became major footwear manufacturing hubs in the 1980s. This led to a boom in counterfeit goods made in those regions beginning in the mid-1990s.

U.S. customs officials reported 1,683 seizures of contraband footwear in 2013, valued at about $55 million. Counterfeit shoes have also made their way into Ebay retailers. In fact, Ebay reported in 2012 that 90 percent of Nike shoes for sale on their website were fake.

"Ebay reported in 2012 that 90 percent of Nike shoes for sale on their website were fake."

The most commonly found fake clothes are also those associated with major sports brands. You’ll find that Nike, Adidas, The North Face, and Columbia are the top 4. 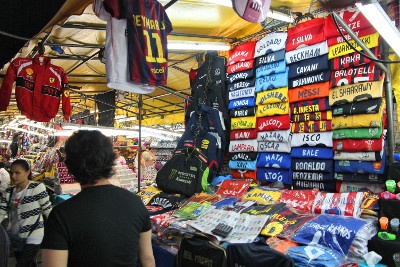 China’s continued production and export of counterfeit sports apparel prompted action from the American Apparel & Footwear Association in July. The association, representing more than 1,000 clothing and shoe brands, sent a formal letter to Alibaba Chairman Jack Ma complaining about the lack of action in addressing counterfeit goods for sale on its websites.

It’s estimated that up to 20 percent of the cosmetics market in China is fake. Fake skincare products are usually made to look exactly the same as the real ones. You often can’t tell the difference from looking at the packaging alone.

But you should be especially concerned about the ingredients used in the products. Fake cosmetics made in China sometimes contain skin irritants, hazardous chemicals or cancer-causing ingredients. And you may be especially at risk purchasing these kind of products on e-commerce sites like Ebay. The safest place to buy authentic skincare products is always the brand’s official store or website.

"Ebay reported in 2012 that 90 percent of Nike shoes for sale on their website were fake."

China’s massive availability of counterfeit goods has become a controversial subject for the past 20 years or so. Droves of foreign tourists flock to China each year to buy fake Coach bags, Beats by Dre headphones, Air Jordans and others.

But the fake products market has many brands frustrated over how to prevent factories and retailers from selling a product that’s often indistinguishable from and at a fraction of the price of their own. And a concern for consumer safety is raised regarding some products, in particular for ingredients used in manufacturing fake cosmetics.

The age-old advice of “buyer beware” rings true. You may be concerned about the quality and authenticity of materials or components used in manufacturing goods you’re importing. That’s why it’s always wise to consider carrying out product inspection or lab testing before the goods ship.

And don't forget to check out the manufacturing podcast episode that covers this topic!