The origin of AQL standard: An Historical View 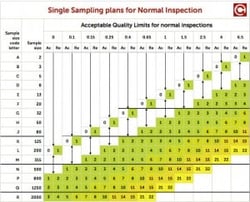 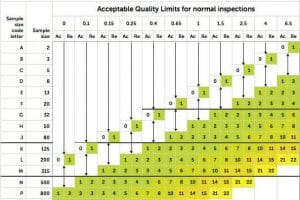 Acceptable Quality Limit standard (AQL) is used by many Quality Control Inspection firms to determine a proper sampling size and the number of allowable defects. While we previously wrote a post on it, explaining how to use the standard, we often hear importers wondering, what exactly is the AQL standard and from where did it derive?

Prior to the mid-1900s, acceptance sampling was not widely followed. AQL standard result in Acceptance sampling that was popularized by Dodge and Roming (pioneers of modern Quality Control) and was originally applied by the U.S. military for testing bullets during World War II. The dilemma was, if every bullet was tested in advance, no bullets would be able to ship on time. If, on the other hand, no bullets were tested, malfunctions might occur on the battlefield, with potentially catastrophic results.

Acceptance sampling plans were thus developed to help distinguish between acceptable and unacceptable lots. The basic assumption here is if the representative sampling is randomly drawn from a shipment, the sample would match the quality level of the lot; therefore, based on this sampling, the acceptance or rejection decision could be made.

Based on the extensive work by the American military during and after World War II, the US government issued the standard for sampling procedure and tables for inspection called MIL-STD-105D in 1963. This was further modified in 1989 as MIL-STD 105 E and re-designated as ANSI/ ASQC Z 1.4 in 1995. For all practical purposes MIL STD 105D and ANSI/ASQC Z 1.4 are the same. These standards are not only used for artillery, but also for everything from clothing to automotive parts to toys. For the purpose of acceptance sampling inspections in the garment industry, for example, most buyers refer to the tables from either of these above AQL standards. While there are times for a 100% inspection, generally the AQL-level inspection is all that is needed to ensure safe production!