Fast Fashion: Good for Business, Bad for the Planet. What Can You Do?

Eighty-eight percent of 85 Chinese textile manufacturers surveyed in 2017 have had to upgrade their factory to avoid being shut down for environmental noncompliance. Do you know how to stay compliant with environmental protection laws? 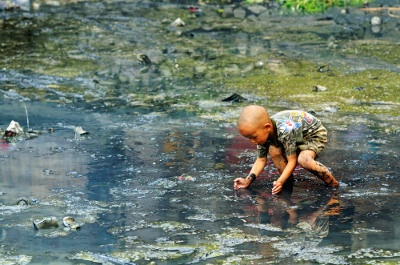 Do you really know the environmental impact of each piece of clothing you buy or sell?

According to a McKinsey article on the “fast-fashion formula”, the average consumer now buys 60 percent more items of clothing every year and keeps them for about half as long than they did 15 years ago. And fast fashion, the retail strategy of quick garment manufacturing at an affordable price, is growing fast—9.7 percent annually from 2009 to 2014.

But its impact on the natural environmental is growing just as fast too. According to a recent report from the United Nations Economic Commission for Europe (UNECE), the fashion industry is the second largest user of water worldwide and produces 20 percent of water waste. It also contributes to 10 percent of global carbon emissions.

So let’s get started by exploring the environmental impact of garment manufacturing and how you can ensure compliance with environmental protection laws.

How fast fashion has revolutionized the garment industry

In the traditional retail model new garment styles are released seasonally, typically two to four times a year in accordance with the seasons of spring, summer, autumn and winter. New styles are introduced months in advance. For instance, spring and summer product lines often appear at fashion shows during the previous autumn. This gives brands enough time to gauge consumer interest and prepare inventory ahead of peak seasons. 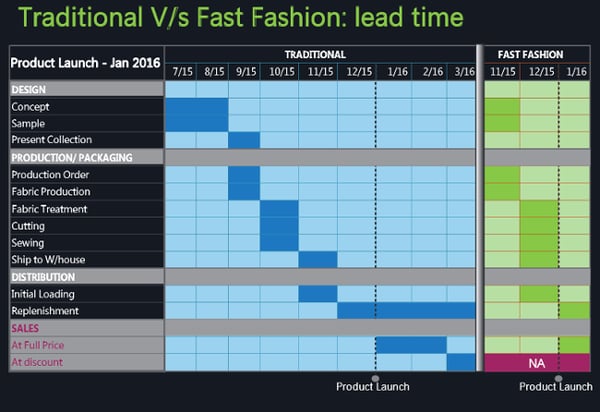 As if it wasn’t fast enough, ecommerce has pushed fast fashion even faster. Even pioneers like Zara and H&M have been losing the speed-to-market race to ecommerce retailers. According to a report from Fung Global Retail and Technology, online fast fashion retailers like Boohoo.com, ASOS and Missguided can produce on-trend garments in just one to two weeks.

Many fast fashion retailers achieve short lead times through near-shoring production, relocating manufacturing to or near their target markets. According to the Fung report, 60 percent of Zara’s production is based in Europe, particularly in Spain, while 10 percent is from near-shore regions such as Morocco and Turkey. Zara imports the remaining 30 percent, primarily basic garments less vulnerable to changing trends, from Asia.

What is the environmental impact of apparel manufacturing?

So what does this all mean? Garment manufacturers are producing more clothes to feed an ever-growing and fickle consumer demand. Consumers now buy 80 billion pieces of clothing worldwide each year, a 400-percent increase from two decades ago. This increase in garment manufacturing has placed an unprecedented burden on the natural environment, both in terms of pollution and waste.

To first consider the environmental impact of a garment, you need to start from the beginning—the types of fibers, both natural and synthetic, that are commonly used in garment production.

Cotton is by far the most popular natural fiber used in clothing. A single cotton t-shirt requires 2,700 liters of water to make. That’s about the volume of water the average person drinks in 2.5 years.

The amount of water required to cultivate cotton has had a major impact on local water reserves. For example, the Aral Sea in Central Asia, once the fourth largest lake in the world at 68,000 square kilometers, is now almost completely dry due to cotton cultivation in the surrounding areas.

Cotton farming also accounts for 24 percent and 11 percent of global sales of insecticides and pesticides, respectively. Pesticides have killed almost all the fish in the Aral Sea, polluted the drinking water and soil and even formed toxic dust storms. Long-term exposure to pesticide chemicals in the Aral Sea is also linked to health consequences like lower fertility rates and higher rates of some cancers and heart and kidney disease.

Polyester and its associated carbon emissions and miscroplastics

Before we point to synthetic fibers as a sustainable alternative to cotton, let’s consider the impact of polyester production. Consider that manufacturing polyester is energy-intensive, requiring crude oil and other fossil fuels that release emissions. A polyester shirt has more than double the carbon footprint of a cotton shirt—5.5 kg vs. 2.1 kg (12.1 lbs. vs 4.6 lbs.).

And polyester’s environmental impact also extends throughout the entire lifetime of the fabric. During washing, polyester garments shed microplastic fibers that end up in the world’s oceans, and often, the fish we consume. On average, a synthetic garment will shed more than 1,900 microplastics during a single wash.

What about organic fibers?

Organic cotton is grown without the use of toxic pesticides, synthetic fertilizers or genetic modification. But organic cotton currently only accounts for about 0.5 percent of global cotton production, with 55 percent of organic production based in India.

The Global Organic Textile Standard (GOTS) is the leading processing standard for textiles made from organic fibers. Textiles must contain a minimum of 70 percent organic fibers to become GOTS certified. Dyes, auxiliaries and accessories must also meet certain environmental criteria.

In the textiles industry, dyeing and printing facilities, in particular, face increased scrutiny for water pollution. The textile industry uses more than a half trillion gallons of fresh water for dyeing fabrics each year. Factories discharge the dye wastewater, often untreated, into the world’s rivers, lakes and oceans. Textile mills account for one fifth of industrial water pollution worldwide. 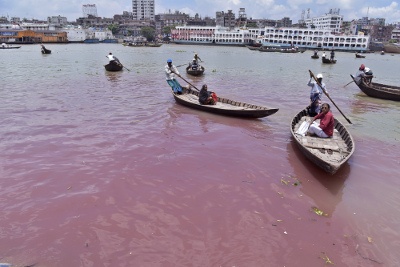 According to official data from China’s Ministry of Environmental Protection, the textile industry was the third largest source of industrial wastewater in China in 2015. The industry accounted for 10 percent of China’s total industrial wastewater discharge and contributed 1.5 times more wastewater than the coal industry. The proportion of water unfit for human contact due to pollution in the Yangtze River is 17.6 percent and 10.2 percent for the Pearl River.

In Dhaka, Bangladesh, the water table is dropping two to three meters per year, due to a lack of oversight on water usage and appropriate equipment. Dhaka’s textile mills use six times more water than international best practices. A recent World Bank report suggests the textile mills in and around Dhaka may consume nearly as much groundwater as all of Dhaka’s 12 million residents.

Widespread adoption of waterless dye technology could drastically reduce water use and pollution. One such company, DyeCoo, even claims their technology can bring production costs down by about 30-50 percent.

But cost is still a huge barrier for many brands and suppliers hoping to invest in new technology. DyeCoo’s machines come with a price tag of $2.5 million to $4 million each. And such costly, environmentally-friendly equipment isn’t a high priority for smaller suppliers that lack significant upfront financing.

With more garments available at cheaper prices, consumers tend to buy new clothes more often than ever, generating more waste. According to the Environmental Protection Agency, the U.S. generated 15.1 million tons of textile waste in 2013, of which 12.8 million tons were discarded in landfills.

Industry experts also estimate three to five percent of a factory’s inventory is waste—unsellable clothing items produced out of specification. Some consequences of discarding or destroying textile waste are: 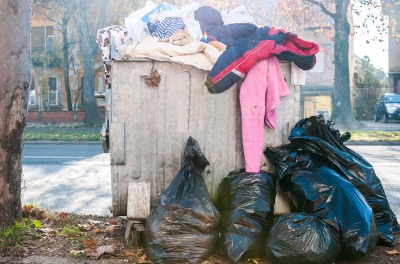 Several fast fashion retailers have started take-back recycling programs, including H&M, American Eagle Outfitters, Neiman Marcus and Levi’s. For instance, if you bring your old textiles products to H&M for recycling, you’ll receive a 15 percent off coupon for your next purchase. Used clothing often goes to second-hand stores or to developing countries for re-wear, while others are repurposed as cleaning cloths, blankets or even insulation for houses and cars.

But there’s still a lot of progress to be made for both brands and consumers on the recycling front. Only 15 percent of consumer used clothing is actually recycled. And only about 0.1 percent of recycled fiber collected by charities and take back programs is recycled into new textile fibers.

The recent environmental crackdown began in 2015, when China amended their Environmental Protection Law. The updated law gives government officials the authority to: 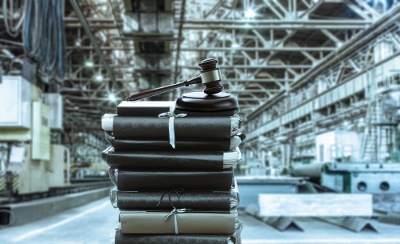 Factories in the textile industry, mainly printing and dyeing facilities, are among those most often targeted by inspections. In early 2018, government officials warned 219 textile printing and dyeing facilities in Zhejiang Province, a textile industry center of China, to reduce their pollution levels or face closure by the end of September. And law enforcement officers recently seized 53 dye vats and dismantled 232 sets of production equipment in Jiangsu Province that exceeded the scope of emission permits.

Eighty-eight percent of 85 Chinese textile manufacturers surveyed by China Water Risk in 2017 said they have had to upgrade their factory to avoid being shut down. And over 50 percent of respondents have invested more than RMB 2 million (~USD300,000) to upgrade their factories to comply with regulations. Small and medium-sized factories might be at greater risk if they lack the financial resources to improve compliance.

How can garment and textile importers assess environmental risk and compliance?

Environmental compliance is often a two-step process for fashion brands. You first need to identify and assess your suppliers’ environmental practices. Then with that information in hand, you might need to take corrective action to comply with environmental laws.

Compliance violations at your supplier’s facility, whether you’re aware of them or not, can disrupt your business in a few ways: 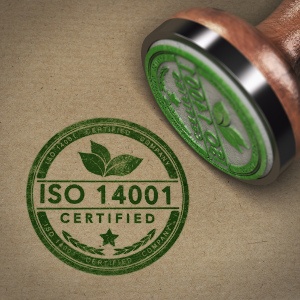 Assessing and ensuring compliance proactively could help you avoid all these problems. A China environmental protection audit can help you check a factory’s compliance with Chinese laws.

Although different in their structure, both audits will assess the factory’s level of compliance and reveal any violations that might put your supply chain at risk. Several fast fashion retailers have already adopted the ISO 14001 standard in their sustainability programs. For example, all Zara distribution centers are ISO 14001 certified.

The fast fashion model may be here to stay for the foreseeable future. The fashion industry supports 60 million jobs around the world. And apparel spending and demand will likely only continue to grow, as middle class consumer markets grow in China, India and other developing economies.

Some would suggest the environmental problem facing the fashion industry is as designer Vivienne Westwood put it, “It’s about quality, not quantity – not landfill.”

Doubling the useful life of clothing from one year to two years alone could reduce carbon emissions over the year by 24 percent. And ensuring your supplier’s factory meets your standards before production can also reduce production waste in the forms of unsellable garments (related: Garment Inspection Guideline [eBook]).

How do you work with your suppliers to ensure environmental compliance? Share your experiences in the comment section below!