Manufacturing in India vs. China

Manufacturing in India stands out as a cost-effective alternative to China. Let’s explore how manufacturing compares between India and China and whether India may be the right sourcing choice for you.

For many importers, the end of profitable manufacturing in China may be near. Apart from a tenuous and vague “phase one” trade deal, any kind of truce in the ongoing China-U.S. trade war seems distant. And without a resolution in the next few weeks, nearly all goods traded between the U.S. and China will have tariffs by December 15.

Is it any wonder why many manufacturers are now considering leaving China, while others are accelerating earlier plans to exit (related: Asia Sourcing Guide: 11 Top Alternatives to China [eBook]).

Manufacturing in India stands out as a cost-effective alternative to China. Companies like Hasbro have announced plans to limit their number of China-made products to half, choosing to relocate much of their production to India.

And Taiwanese Foxconn, which manufacturers Apple’s iPhone and Amazon’s Echo, built their first plant in India in 2015 and plans to expand operations there.

But many other companies are either looking for solutions outside India or prefer to remain in China. They view India’s many challenges—a skills gap and inadequate infrastructure among them—as insurmountable barriers to their continued success.

Let’s explore how manufacturing compares between India and China and whether India may be the right sourcing choice for you.

What does India export today?

Contributing seven percent of the country’s GDP, India’s precious metals and stones industry employs 4.6 million workers. Labor-intensive cutting, polishing and processing of small diamonds is a particularly strong sub-sector for India. Other gems, gold and jewelry are other major products in this category.

The garment and textiles industry is one of India’s fastest growing. Overall textiles exports were valued at $39 billion in 2018 and are expected to more than double by 2021.

Part of the growth comes from various government initiatives, such as a 2018 increase in basic customs duties from 10 percent to 20 percent on more than 500 textile products. Another contributor is India’s robust production of relevant input materials, such as cotton, which lend supply chain and cost advantages.

These exports include knitted, woven and crocheted textiles and apparel, carpets and textile floor coverings and man-made filaments.

Despite China’s current dominance in export value, India’s government is making serious efforts to invest in the country’s manufacturing sector. Though the manufacturing sector now contributes only 16 percent to India’s gross domestic product (GDP), the “Make in India” initiative aims to boost that contribution to 25 percent by 2022.

And companies like Chinese smartphone maker OnePlus are investing heavily in R&D in India. “Our success in India has proven to be a great model for our growth in other regions,” says OnePlus CEO Pete Lau. “…We are now closer to making India as our second headquarters.”

Cost and availability of skilled labor in India and China

Differences in manufacturing wages, size and skill level of the labor force should be at the forefront of your decision to move production from China to India. Depending on your product type, some of these factors may highlight clear advantages for remaining in China. 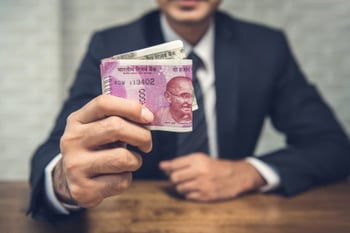 Labor represents one of the main costs of manufacturing goods. And importers have watched China’s labor costs soar in recent decades, often growing by 10-15 percent annually. China’s minimum wages, which now range from about US$140 to US$346 per month, are set at the provincial level.

India’s minimum wages similarly vary across states and range from about US$66 to US$202. Mounting U.S. tariffs on Chinese goods over the past year have only strengthened the case for India as a cost-effective manufacturing alternative. And importers of labor-intensive products, like garments and textiles, are in the best position to realize cost savings by moving to India.

Among the many manufacturing locations opposing China, India is unmatched in the size of its labor force. According to September 2019 data from the World Bank, India’s labor force numbers about 519 million. China’s labor force is still much larger with 783 million strong. But Indonesia’s labor force, with 134 million workers, is a distant third for the region.

India falls behind many of its neighbors with regard to factors the World Economic Forum use to rank countries in their human capital report. India ranks 103rd overall, while China ranks 34th.

One area where India suffers a deficiency is in “know-how”, which includes the breadth and depth of specialized skills at work. We see this directly at play in the quality and complexity of the country’s top export products. This metric also measures employers’ perceived ease at filling job vacancies.

India also has room to grow with regard to its labor development rank. This rank considers access to and enrollment in formal education, opportunities to upskill and how well the education system fits the needs of a competitive economy.

Some have attributed the low development rank to India’s shortage of vocational schools.

On the positive side, India has performed relatively well in terms of quality of education, staff training and economic complexity.

Logistics and infrastructure of India and China

Anyone hoping to succeed at manufacturing in India must consider the logistics and infrastructure of the country compared to those of alternative sourcing destinations. Logistics and accessible infrastructure can have a major impact on both the deliverability and quality of goods.

For example, the time needed to ship goods from an inland factory to a port can vary considerably depending on the local means of transportation. Rough conditions or prolonged transit can significantly impact the condition of goods received at their destination.

The World Bank publishes its Logistical Performance Index (LPI) every two years, ranking countries according to several criteria, including:

China ranks 26th among 160 countries studied, while India ranks behind China and others in Asia at 44th. India lags behind China in two areas, in particular—timeliness and quality of infrastructure.

As of 2018, India’s road network spanned 5.5 million kilometers and is one of the largest in the world. The problem with India’s roads is that 40 percent are unpaved. National highways make up less than three percent of total roads, compared to 40 percent in China. And 75 percent of India’s highways are two-lanes wide or fewer.

Similar constraints impact India’s railways. By the end of 2018, China boasted two thirds of the world’s total high-speed railway lines with a network spanning 29,000 kilometers and supporting trains capable of reaching speeds of 250km/hour. Meanwhile, the average speed of passenger and freight trains in India is limited to 60km/hour and 25km/hour, respectively.

These factors greatly limit the flow of traffic and the capacity of India’s roads and railways to support commercial trade.

India’s government is investing heavily in strengthening infrastructure, however. The government reportedly spent US$1 trillion on infrastructure between 2008 and 2017 and plans to invest about US$1.4 trillion more in the next five years.

Ease of Doing Business in India vs. China

The World Bank’s Doing Business project attempts to objectively rank 190 economies by measuring business regulations and their enforcement. The rankings offer helpful insight that can help manufacturers and others understand the relative ease of operating in particular countries.

China fared well in the latest 2020 rankings, coming in at 31st overall. And though India ranked below China at 63rd, it outranked some other manufacturing hubs in Southeast Asia, including Cambodia (ranking 144th) and Vietnam (ranking 70th).

Let’s look at some of the business factors where India and China differ most strongly.

There’s a wide gap between the ease of starting a business in India and starting one in China. The World Bank compares Mumbai with Shanghai across several indicators.

India’s performance is well below China’s and many other Asian countries’ when it comes to contract enforcement.

Those raising a legal dispute in Mumbai can expect the whole process—filing suit, awaiting trial and judgement and enforcement—to take almost four years. Meanwhile, a similar dispute in Shanghai is typically resolved in about nine months.

The World Bank also ranks “quality of judicial process” on an 18-point scale and awarded Mumbai 10.5 points to Shanghai’s 16.5 points.

Where India is improving

India still lags far behind China in terms of Doing Business rank. But there are some relevant redeeming areas where the country has performed well or is improving. Obtaining credit, for example is easier in India. And India and China scored similarly in terms of getting electricity, paying taxes and cross-border trade.

The manufacturing and trade landscapes differ greatly between India and China. India’s comparatively low wages make it a much more cost-effective place to manufacture certain types of products.

On the other hand, India’s inferior infrastructure and tedious regulatory environment can give the most patient importers a migraine.

No two buyers are the same. As an importer, your success depends upon accounting for all factors that will affect your own specific product and customers. And as the China-U.S. trade war continues, you must remain flexible and attuned to changes.