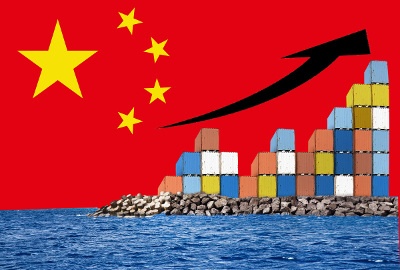 But the country’s manufacturing sector faces rising wages, foreign competition, currency pressures and other challenges. Amid these setbacks, how does China’s government hope to reach its recent target of 7 percent annual growth for manufacturing between now and 2018? The answer may lie in China’s move up the industrial value chain.

By moving toward more value-added manufacturing, China has found itself the exception to the global decline in manufacturing. Despite misconceptions about manufacturing in China, the country’s not only remained competitive for importers, but has also grown in sophistication, gradually shifting to more high-tech manufacturing.

Let’s take a close look at what China is doing to move up the value chain and how this change is affecting importers.

How is China moving up the industrial value chain?

China’s manufacturing sector is undergoing a number of changes—some introduced by the government and others born from factories themselves. Here are some of the main factors pushing the country higher up on the industrial value chain:

One strategy that has helped China remain competitive is the use of clusters. Clusters are groups of factories and their suppliers producing the same products. The result is often entire cities dedicated to manufacturing a single product or type of product. Some examples of clusters in China include Zhuji, a city in Jiangsu Province famous for producing socks, and an area of Wenzhou, Zhejiang Province, known for being a manufacturing hub for shoes.

How is China using clusters to get an edge over the competition?

There are a few clear advantages to having concentrated areas of factories producing a single type of product:

China has been using clusters to grow their manufacturing sector for decades. But as China transitions to producing more sophisticated products, they’ve kept the same model for growth. Now there are zones for producing solar panels, like Wuxi in Jiangsu Province, zones for producing computers and semiconductors, such as Chengdu in Sichuan Province, and many others.

One driver of China’s move up the industrial value chain has been investment, both foreign and domestic. According to a KPMG report, China’s foreign direct investment (FDI) reached an all-time high of $126.3 billion in 2015. And along with the central government’s target of 7 percent annual growth for manufacturing, there’s been a 15-percent increase in corporate investment.

Efforts to improve manufacturing are also apparent at the provincial level. The government of Jiangsu invested 4 billion RMB (about $600 million) in June 2016 to improve logistics and production equipment across the province. These efforts aim to encourage companies to invest in automation, research, design and advanced technology.

China’s shift to a consumer-based economy

Partly driven by rising wages and growth in the services sector, China is becoming a more consumer-based economy. And manufacturing firms are gradually moving from producing lower-cost goods for export to producing higher-quality goods to meet the demands of the Chinese consumer. As a result, FDI in high-tech manufacturing has grown in recent years to nearly one fourth of all FDI in manufacturing.

China has long been associated with cheap, low-quality goods. But the Chinese government plans to change that view with its “Made in China 2025” initiative. The plan aims to stimulate China’s manufacturing sector by adopting new technology to make it more competitive globally by 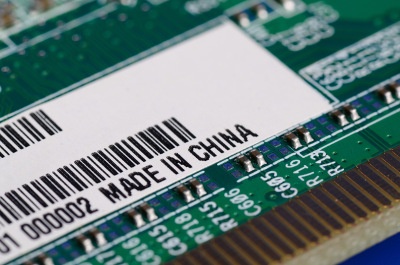 2025. Some of the plan’s priorities include:

A growing number of complex products are expected to come from Chinese factories as the plan is realized. Along with more sophisticated products, automation is also expected to spur China’s move up the industrial value chain.

Chinese manufacturers are on a mission to become leaner, more technologically advanced and innovative. In doing so they’ve become the world’s largest market for industrial automation and robots. Impressive technology like the Chinese-made YuMi robot is appearing on more and more production lines in factories. Robots like this one are able to work alongside humans to reduce labor costs while improving product quality.

How effective are the robots introduced on assembly lines?

According to Luo Weiqiang, assistant general manager of Guangdong Everwin Precision Technology: “By using 60 industrial robots, an assembly line that would have needed about 600 workers in the past now needs just 100…” Aside from needing fewer workers, Luo also notes that general productivity has increased with the adoption of robotics.

Not every factory is embracing automation just yet. But we can expect to see more factories adopting robotics and other technologies in an attempt to increase efficiency and value-added manufacturing in China.

When looking at cities that have contributed most to China’s move up the industrial value chain, it’s hard to ignore Shenzhen. Once only a small fishing village in Guangdong Province in 1979, Shenzhen overtook Hong Kong in 2015 to rank number one among China’s list of competitive cities. Today the city remains one of China’s leaders in advanced manufacturing and innovation, known by some as China’s “Silicon Valley”. 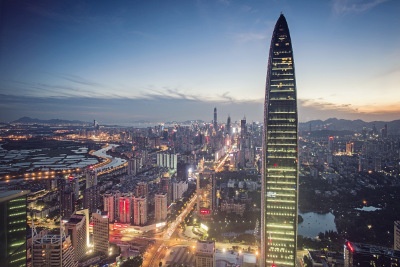 Major companies like China’s Huawei, Tencent and DJI are all headquartered in the city because of how important it is as a hub of innovation and production. And considering that about 90 percent of the world’s consumer electronics are made in Shenzhen, it’s no surprise that giants like Apple have extensive manufacturing operations in the city as well. Shenzhen still has a strong base of low-end manufacturing but has taken to more advanced manufacturing techniques, including automation.

Other cities throughout China have followed Shenzhen in pursuing more high-tech manufacturing. Chongqing is just one example, where the electronics industry’s total gross industrial output grew from 11.4 percent in 2012 to 15.4 percent in 2014. The Chinese government has introduced incentives for manufacturers to relocate operations to inland cities, like Chongqing, where wages are as much as 30 percent lower than in eastern provinces.

How will more value-added manufacturing in China affect importers?

As wages continue to rise and manufacturing becomes more advanced in China, a couple of changes are happening. These are likely to affect importers differently, depending largely on the types of products they manufacture.

Sourcing high-tech optics, drones and other sophisticated products from China was difficult, if not impossible, just 5-10 years ago. But now importers can readily find these products at a reasonable level of quality. China recently surpassed Japan in its share of Asia’s high-tech exports. In 2014 China exported 43.7 percent of all Asia’s high-tech products, up from 9.4 percent in 2000. 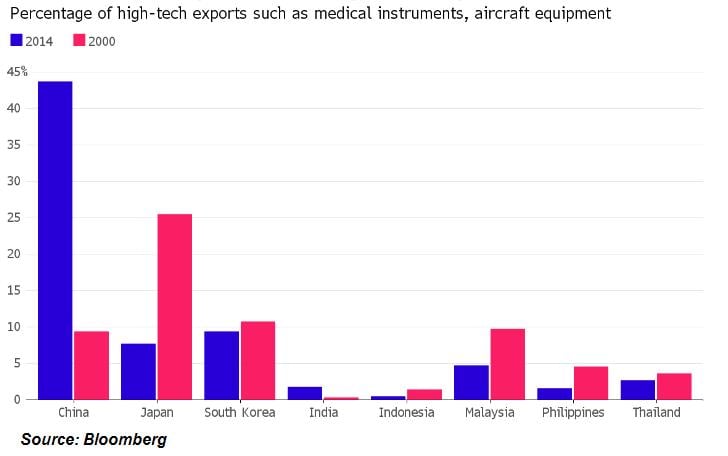 In reference to China’s move to upgrade manufacturing, Zhu Haibin, chief China economist at JPMorgan Chase & Co. in Hong Kong was quoted as saying: “In some areas we are already competing directly with South Korea, Taiwan and southern European countries such as Spain.” There are more opportunities for importers to source high-tech, high quality products from China than ever before.

China’s move up the industrial value chain has also signaled a decline in more labor-intensive manufacturing, especially in the softlines industry. While China remains the world leader in garment exports at $170 billion per year, manufacturers have started relocating to countries with lower 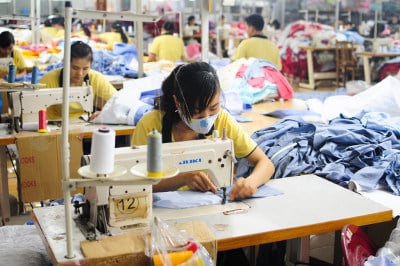 And although India has an abundance of relatively cheap labor, it lags behind in developed infrastructure needed to support a large manufacturing industry (related: Manufacturing in India vs. China).

Why is garment manufacturing leaving China?

There are two main reasons why garment manufacturing is leaving China. The first is China’s rapid increase in wages. China’s average manufacturing wage in 2014 was about $8,300 a year, about 2.5 times and 8 times that of Vietnam and Bangladesh, respectively. Secondly, garment manufacturing is resistant to automation. Although raw textiles are typically made with automated machines, sewing a seam in a garment is still a process that needs to be guided by hand.

For many garment importers, turning to other countries in Asia seems like the natural progression to avoid high costs. But it’s important to be aware of the potential for social compliance issues that often come with manufacturing in less-developed countries. Incidents like the Rana Plaza factory collapse led to entire retailers, including Disney, pulling manufacturing out of Bangladesh entirely.

China continues to play a dominant role in manufacturing and trade. Investments in advanced manufacturing and establishing industrial clusters seem to be helping China become even more competitive. The shift will no doubt affect importers across the globe.

But China's ascent comes not without a struggle. According to Xiao Geng, professor of finance and public policy at the University of Hong Kong:

While the competitiveness of Chinese industry has been improving rapidly, the same is true of competitors from South Korea to Taiwan and Germany… China’s companies and governments, both central and local, need to work very hard to improve its current competitive position.

And don't forget to check out the manufacturing podcast episode that covers this topic!

What signs have you seen of China moving up the value chain? What other changes are coming to importers? Let us know in the comments section below!