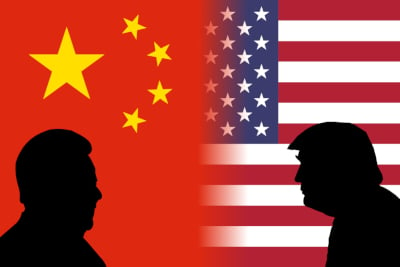 The U.S.-China trade war has been ongoing for almost a year since it started back in July 2018. And now it’s escalating further.

Earlier this month, U.S. President Trump raised tariffs from 10 percent to 25 percent on $200 billion worth of Chinese goods. China retaliated one week later by announcing it will raise tariffs to 25 percent on 2,493 U.S. goods.

The latest U.S.- China talks ended on May 10th with no word of progress. President Trump says he will next meet with Chinese President Xi Jinping during the G20 meetings in June. Until then, the trade war between the world’s two biggest economies shows little sign of stopping.

Before the tariff increases, U.S. and Chinese officials last held trade talks in late April. This was the 11th round of negotiations to put an end to the bilateral tariff war.

But President Trump was seemingly dissatisfied with the talks. Trump posted a tweet on May 5th threatening to hike tariffs from 10 percent to 25 percent on all Chinese goods. The new trade policy officially followed on May 10th.

The proposed list of affected goods covers nearly every consumer product not included in previous tariff lists, including laptops, cellphones, clothing, home textiles and sporting goods. The tariffs are planned to take effect at the end of June.

In response, the Chinese Ministry of Commerce expressed their "deep regrets" regarding the decision and said China would have to take necessary countermeasures.

Chinese officials then announced on  May 13th China will increase tariffs on $60 billion worth of U.S. goods from June 1, 2019. The tariffs will be imposed at four different levels, according to the announcement:

The trade war isn’t likely to come to a swift end, as China has been unwilling to back down throughout the trade war. The Chinese embassy said in a statement back in 2018:

If a trade war were initiated by the US, China would fight to the end to defend its own legitimate interests with all necessary measures.

Manufacturing industries in both countries will be affected

A trade war is never just about tariffs. Trump’s tariff policy is intended to narrow the nation’s trade deficit. But the tariff policy will also affect individual importers and manufacturers in both countries.

Tech products like computers and electrical equipment form a large part of the U.S. trade deficit with China. According to U.S. Census data, the total value of U.S. imported goods from China was $539 billion in 2018. Among these goods, computers and electronics made up $186.5 billion, or about 34 percent.

The harsher tariff policy will significantly impact U.S. tech companies which manufacture their products primarily in China. For example, the tariff increase could affect a wide range of Apple products, including the iPhone, Apple Watch, AirPods and more. A 25 percent tariff would effectively raise the price of an Apple iPhone XS by $160, according to one estimate.

China’s manufacturing industry has also been deeply affected. Many U.S. companies are shifting their manufacturing from China to other Asian countries to avoid the tariffs. Apple plans to build product lines in India for lower tariffs and labor costs, for instance (related: Is the Trade War Pushing Manufacturing Out of China?).

U.S. or China will likely have to surrender in the trade war eventually. But Gary Hufbauer, a China expert at the Peterson Institute for International Economics, says China’s not giving up yet: “Xi is preparing the Chinese people for an all-out economic war with the United States.”

Both sides look like they’re going to take a tougher stance before either eases off. Follow the link below to learn more about China’s tariffs on the U.S.

China Retaliates Against the U.S. With Its Own Higher Tariffs – Keith Bradsher, New York Times

2. Starbucks’ blockchain will tell you where your coffee comes from

to work is a daily habit for many people. But have you ever asked about the origins of your coffee?

Starbucks is planning to use blockchain technology in its supply chain to tell customers about the source of their coffee. This technology will help link coffee buyers and coffee growers together for greater transparency.

Multiple parts of Starbucks’ supply chain can benefit from this transparency. Starbucks can better analyze their customers’ habits, customers can track where their coffee comes from and coffee growers can see where their products end up.

Although the launch date of the new service remains unknown, the digital traceability program is a highly anticipated step forward in ethical sourcing.

Ethical sourcing concerns have been growing among consumers in recent years. And Starbucks is aiming to foster closer relationships with its customers through responsible growing of fair-trade coffee.

Starbucks announced they will use the Microsoft Azure blockchain service for this program.

In collaboration with Microsoft, Starbucks plans to develop a blockchain-based supply chain tracking system and mobile app. The digital program will track every ingredient in a cup of coffee, which consumers can access via a single mobile app.

Customers can see in the mobile app where their coffee beans were grown, how they are processed and how Starbucks is supporting those coffee farmers. Gerri Martin-Flickinger, Starbucks executive vice president and chief technology officer, said:

Everything we do in technology is centered around the customer connection in the store, the human connection, one person, one cup, one neighborhood at a time.

This kind of transparency offers customers the chance to see that the coffee they enjoy from us is the result of many people caring deeply.

Consumers today want more transparency about where and how a product came to be. If you shine a light on the food system, that leads to transparency.

The fashion industry is also starting to use blockchain technology. Designer Martine Jarlgaard is working with software company Provenance to improve transparency in their supply chain. Jarlgaard said: “We are such a closed, centralized system. Being open and transparent is the only way forward.”

Neliana Fuenmayor, the founder of A Transparent Company, commented the project is “a way to embrace new technologies that can help the circular economy to become a reality”.

After a spectacular unveiling in February, Samsung’s Galaxy Fold is in the spotlight again. But not for good reasons. The smartphone giant has since failed to launch its foldable smartphone on schedule due to quality issues.

Some early reviewers of the phone reported several display issues with the Galaxy Fold. Samsung has since delayed its launch and recalled the early release units. The company is now working to fix the quality issues, but customer interest in the product has already faded.

Samsung’s CEO DJ Koh addressed the display issues in mid-May, noting that “news” was coming soon. But there’s still no clear date for the new launch.

Aside from Samsung, there are many tech companies facing challenges in manufacturing foldables. As with any innovation, manufacturing problems still need to be solved before foldables can be successful.

Quality issues cause headaches for Samsung

Foldable smartphones are a hot topic among consumers, and many brands are competing to occupy this new market. As the first company to release a foldable phone, Samsung met its “waterloo” with the Galaxy Fold.

Samsung initially said it would launch its Galaxy Fold on April 26. The company first shipped some pre-release units to the media, but several reviewers reported display issues in just a few days:

Due to these issues, Samsung announced a delay of the product launch before recalling the review units.

Samsung will also automatically cancel all Galaxy Fold pre-orders if it has not shipped the device by May 31st and customers haven’t indicated they still want the product. And Samsung won’t charge the customer's credit card until the Fold ships.

Although Samsung is now reportedly readying its Galaxy Fold for release after finding a “fix”, the new phone’s launch date is still unknown.

But there are still many challenges in manufacturing foldables. The phone’s glass screen and the electronic components inside must be durable in order to fold properly.

Only with high-quality products can a brand stand firmly in this new market. Follow the link below to learn more about the challenges facing Samsung and other flexible technology manufacturers.

Can we bend it? The challenge for Samsung and others to make flexible technology  – Drew Evans, The Conversation